On The Cultural Significance of Deadpool’s Opening Weekend

What can I say about Deadpool that isn’t already being said by 200 million satisfied customers worldwide this weekend?  This film has broken every record in the book and at a 58 million is going to be one of the most profitable films of all-time.  What does it say about the state of pop-culture that a character famous for lampooning the establishment of a once marginalized medium is now going to be more famous than ever for pulling the same trick in the world of film?

Lord knows I do not care about preamble – and neither does he – so if you want to read a structured review then consult Google but they are all going to say some variance of the same thing: this movie works…so well because 20th Century Fox (wait isn’t it 21st Century Fox yet…I feel like it is but they are just slow-rolling it out over the next fifty years) did the unthinkable and let a bunch of passionate creative types as well as God’s Perfect Idiot take an anti-establishment, irreverent character they love from the world’s preeminent media company and showcase him in a way that is palatable for mainstream audiences that are 17 or have a fake ID without sacrificing the spirit of the character in the name of positioning it in the direction of this-or-that version of some asshat’s bureaucratic view on what makes a successful film.

You know, the people that perpetrated such crimes against the global economy and collective conscious as: Green Lantern, X-Men Origins: Wolverine, the last few Transformers, I assume last year’s Fantastic Four even though I don’t know anyone who reads comics that actually sat through it, 300 #2 or whatever it was called but it really sucked balls, X-Men 3: The Last Resort, Green Lantern and Batman V. Superman…hold that thought, let’s get back to Deadpool. This film works because Deadpool works, period.  It works because Ryan Reynolds, Tim Miller & co. bring the Merc-with-a-Mouth to life and he is allowed to speak to his audience which, judging by its record-breaking opening weekend, is pretty damn large and probably filled with a lot of people that have grown tired of the stagnancy of the Hollywood system and were ready to pay to see this movie, twice.
Do I need to tell you the plot? No! Go watch it. It’s awesome. The superhero genre has been in sore need of a revisionist take and lord knows that Watchmen got lost in translation somewhere around the…everything…but this movie more than makes up for that overly-commercialized, pandering piece of garbage (minus one actor) and gives the genre a reminder that telling the same old super-hero story is not the only thing in it’s utility belt because if there is one thing that Deadpool stands for it’s gratuitous violence, inappropriate sexual humor, being what Alan Moore probably considers emotionally sub-normal having a voice.  The voice of Deadpool is the voice of the fan and the incredible success of this film proves that empowering that voice isn’t just an ideal to live up to…but it can make you over 200 million dollars in one weekend.

Posted by Unknown at 5:09 PM No comments:

In Response to the Release of Blue Mountain State: The Rise of Thadland

Last week, Mountain Goats fans around the world rejoiced as the long-awaited follow-up film Blue Mountain State: The Rise of Thadland was released and quickly became the number one movie on iTunes. The film was directed by Lev L. Spiro (Arrested Development, Weeds, Dawson’s Creek) and co-produced by UEG and Lionsgate along with a nearly two million dollars endowment made by almost 24,000 backers during its Kickstarter campaign during the Spring of 2014.  As a reward for backing the film, fans received prizes ranging from merchandise to film credits – the names on the film’s lengthy end credits read off like a message board on bro bible -- whereas the student body at Arizona State University just received a cast party and private screening of the film for making the largest overall financial contribution among universities.  The Sun Devils legacy as the nation's number one party school seems safe.


When the Kickstarter campaign exceeded its goal and the original writers and cast announced the film had begun pre-production I wrote a short piece on Bleeding Cool calling it “another major step forward in the relationship between fans and producers.”  One of the reasons I felt compelled to write the piece was that, despite the film having received the third-largest financial contribution for a film on Kickstarter, very few media outlets were covering the story.  While the show was strictly a cult classic, having run for only three seasons during Spike TV’s short-lived flirtation with scripted television, I was surprised that the success of its campaign was not a bigger story. Although the show had never been a favorite amongst critics like Veronica Mars – which holds the all-time record for crowdfunding at 5.7 million dollars -- I always thought that the one rule of media is that where there is success there is always more coverage.  This is also true in football but, like the show, this article is not really about that. 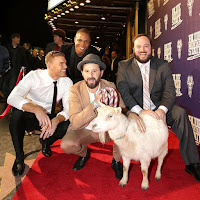 Last week, the film became the number-one movie on iTunes in North America and numerous countries around the world last week.  It is currently the second-most watched film among college students and, even more impressive, many of the editorials I have read online are very thoughtful examinations of the varied ways in which people view the show which must come as a welcome turn-of-events to its producers when compared to the cricket theater that greeted the film’s Kickstarter campaign.
One of the most positive things you can find on the web about the show during its original run is an short piece where it beat out It’s Always Sunny in Philadelphia to earn the label as the most raunchiest show on television from The New YorkTimes, but now I look at many of the same outlets which had treated the show somewhere along the spectrum of indifference to disdain when it was on-the-air and see a very different story playing out.  There are plenty of negative reviews of course, a few positive ones, but the one that I really liked looks at things from a broader perspective and comes from the A.V Club.  The AV Club is one of my de-facto internet bibles and had rarely given the show much coverage except when it labeled Blue Mountain State one of the worst shows on television in 2010, however, last week author Alex McCown wrote an in-depth editorial examining the dual nature of the series’ broad appeal, striking a dichotomy between those that look at the show as a celebration of frat culture and those who see it as a campy and over-the top evisceration of that same culture, as McCown mused: “Art that’s routinely seen by the mainstream as offensive or trashy can be understood through a very different perspective by filtering it through a subcultural lens. It’s hard to say where trash like Girls Gone Wild ends and absurdism like Blue Mountain State begins…" 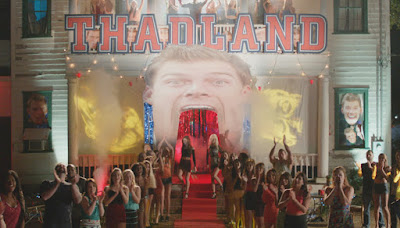 "...for all its horrific surface-level gender (and racial) politics, [the show] is also campy as hell. It acts out the concept of sexist, entitled college-age man-children with such smiling bravado and hollow soul, it goes over the top and becomes a parody of that same culture, whether the show intended that to be the case or not. Except, for a large percentage of its fan base, that’s not what’s happening at all. To many of the collegiate kids who embrace it, it’s just a rah-rah celebration of playing sports, screwing anonymous girls, and partying as hard as you can…and the question of how it can be both at once—of whether it’s even acceptable to find enjoyment in a show [like Blue Mountain State]—gets at the very heart of both the idea of camp and the question of political entertainment.” 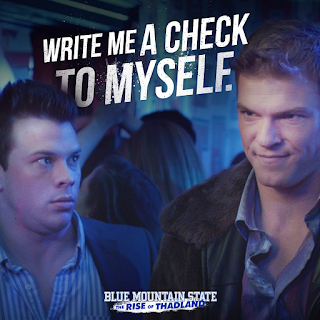 If you have not seen the show, Blue Mountain State does not sound like a remarkable addition to the television zeitgeist on paper.  It follows a frat house of college football players as they tackle partying, sex, drugs and almost never other football players over the course of three seasons and now a feature-length movie.  Feminist critics, as well as anyone with a brainstem, will note that the world of BMS is filled with anonymous girls and clichéd male fantasies, however, like South Park it follows a creed of equal-opportunity lampooning as the roles of women are written and performed with the same satirical lens as the rest of the cast. 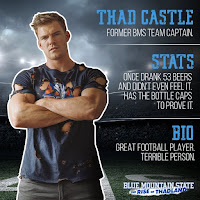 In particular, the spirit of the show ultimately rests on the shoulders of Alan Ritchston (Teenage Mutant Ninja Turtles, Smallville) whose incredible performance as moronic team captain Thad Castle exemplifies everything that is wrong about frat culture as well as everything that is amazing about this show.
While good-natured protagonist Alex Moran, captured perfectly by Darin Brooks, brings much-needed balance to the show along with his best friend Sammy Cacciatore, portrayed by the series and films’ co-writer Romanski, it is Ritchtson’s performance that ultimately makes the show and this film – which he co-produced and starred in before reprising his role as Raphael in the upcoming Teenage Mutant Ninja Turtles: Out of the Shadows –  will leave a lasting impression as it brings his character face-to-face with the question that every young adult wrestles with in some way, shape or form: what happens when the party ends?

If the show never returns for another season this film is a great send-off to both of their characters as well as a strong addition to the legacy of Blue Mountain State, however, I have to believe that success is indicative of success and the best is yet to come for Mountain Goats’ fans, or as series co-writer Eric Falconer recently put it:


“We’ve got amazing momentum going for BMS right now. Let’s keep it going all the way to a season 4!”